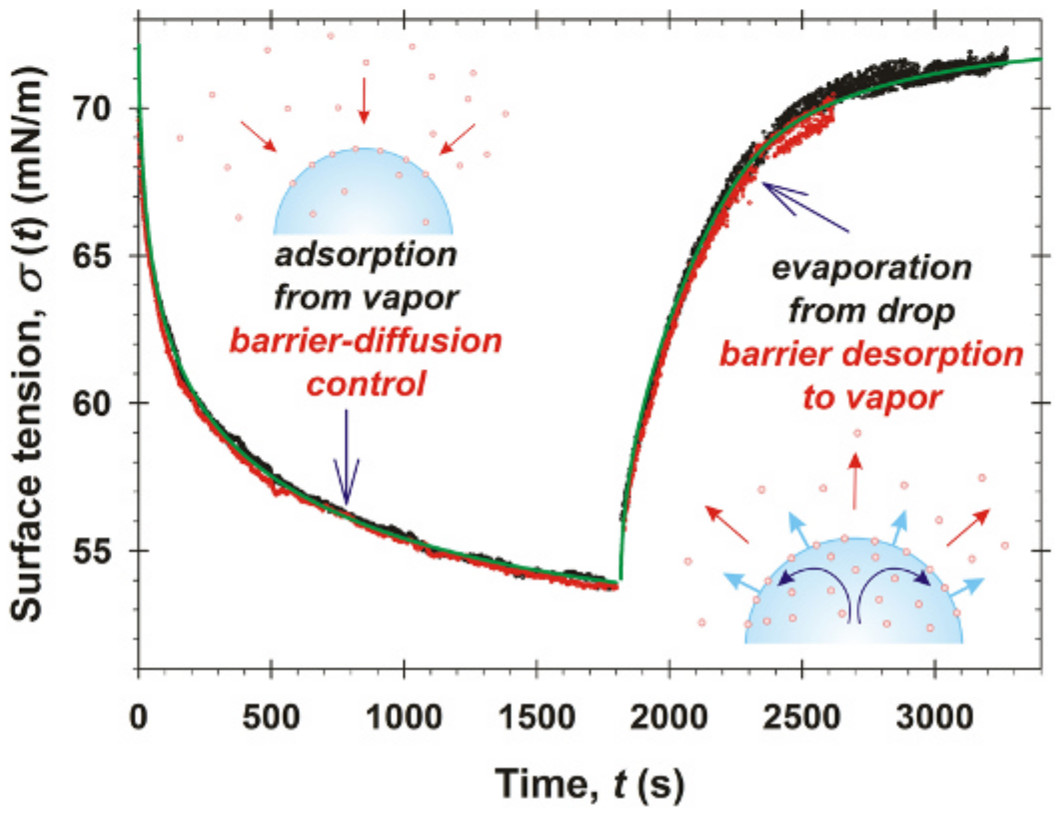 Subject of this work is to investigate the kinetics of mass transfer of volatile amphiphiles from their vapors to aqueous drops, and from the saturated aqueous drop solutions to air. The used amphiphiles are benzyl acetate, linalool, and citronellol, all of which have low saturated vapor pressures, appreciable solubility in water, and well pronounced surface activity. The adequate theoretical processing of the equilibrium sur­face tension, σ , isotherms is applied to construct the two-dimensional equation of state, which relates σ to the adsorption, Γ, at the interface. The measured surface tension relaxations with time t in the regimes of adsorption from vapor and evaporation from drop combined with the equations of state provide quanti­tative information on the change of adsorption because of the volatile amphiphile mass transfer across the surface. The theoretical analysis of the diffusion and barrier mechanisms in the case of adsorption from vapor to the aqueous drop shows that the mixed barrier-diffusion control in the vapor and diffusion control in the drop describe experimental data. The obtained values of the adsorption rate constants are six orders of magnitude larger than those for hexane and cyclohexane reported in the literature. The regime of evaporation from aqueous amphiphile solution drop follows the convection-enhanced adsorption mecha­nism with desorption rate constant in the vapor affected by the simultaneous water evaporation and amphiphile desorption. The water evaporation suppresses the evaporation of linalool and accelerates desorption of benzyl acetate and citronellol. From viewpoint of applications, the obtained physicochemical parameters of the studied three fragrances can help for better understanding of their performance in shampoo systems and perfumes. From theoretical viewpoint, the result show that by introducing an effective amphiphile desorption rate constant it is possible to quantify the complex volatile amphiphile desorption accompanied with the water evaporation.